Time To Dig Out The Thermals

Following a glorious autumnal day (see Sunday's post), today, only two days later,  it appears winter may finally have arrived. For the first time this year I had to scrape ice from my car windscreen this morning. Not quite to the extent in this photo but ice nevertheless.
Time to dig out those hats gloves and thermals
Posted by Wurzel at 14:36 3 comments: Saved By A Spanish Super-Hero

Last week I had a very enjoyable week in Spain with the family. Not content with sitting on the beach all week, one day we took a drive up into the mountains of the Sierra de Espuña. Whist there we came across the village of Aledo seemingly clinging to the edge a steep slope just asking to be explored. Our hire car was a Seat Ibiza, not the biggest of cars but certainly no micro-mini, and as we drove around the almost medieval looking village the streets, presumably designed for donkeys not cars, became narrower and narrower. Soon we had literally inches to spare on either side, and just as I was contemplating folding in the wing mirrors we came upon a right angled left-hand bend. The picture below is one I have found online, I can't be certain but I am pretty sure it was this bend, with us approaching from the right and turning towards the camera position. 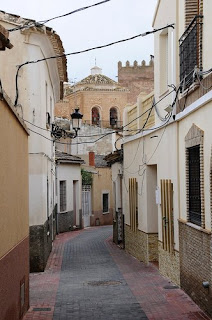 The picture, if anything, makes the road look a lot wider than it did at the time, and as I tried to negotiate the turn I soon realised I was wedged - any further progress would result in a crumpled right front bumper or left wing (or both). I wasn't worried about causing a traffic jam, the whole village was deserted, presumably on afternoon siesta. Reversing though simply wasn't an option, and I was already thanking my lucky stars I had been talked into the extra insurance at the car hire desk.


Suddenly a dark curly haired Spaniard appeared in front of the car. There were 4 of us in the car, none saw where he came from . He was just there as if by magic! In rapid, incomprehensible to us, Spanish he gave me instructions, signalling with his hands which way to turn the steering wheel, whilst dancing from side to side inspecting the sides of the car every couple of inches. I still don't know the Spanish for stop, but language wasn't a barrier, I sure knew when he was telling me not to go any further.

After half a dozen or so manoeuvres we were round the bend. I stopped so that I could at least wave him a thank you. But he was gone. There was hardly room for the car to have even passed him, yet he had simply vanished. Not one of us saw where he went.

He may have only been wearing jeans and a white t-shirt, no cape or mask, but to us you were our Spanish Super-Hero. If by some chance you ever read this, a big muchas gracias. If you even exist at all that is !