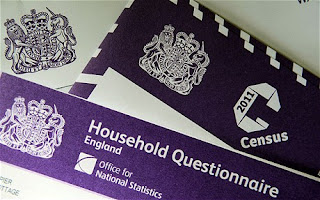 I finally got round to filling in my census form last night. It's been sat on the coffee table for about 3 weeks waiting to be filled in but that's about par for the course for me.
Unusually for me I chose the old fashioned paper and pen method as opposed to filling it online. I don't know why, it just seemed more important doing it that way.
It was pretty simple to complete. Straightforward questions asking a few personal details. Nothing controversial, the only one I thought waseven remotely snooping was asking the name and address of where you work. Nothing they (or at least the Inland Revenue anyway) wouldn't already know  about any honest citizen and I'm sure anybody with anything to hide wasn't going to give their secrets away by filling the details in on there.
The one thing that really struck me was reports that the helpline received over half a million calls requesting help. As I've already said, pretty simple questions, I just can not fathom how that many people could have a problem, or what it was they were confused over. I appreciate that a certain percentage of the adult population can not read, but then would also guess that they would be unable to read that the helpline was available so I'm discounting them. In true conspiracy theory style I am thinking that the census was indeed gathering more information about us that was let on, but not the information people are thinking. My theory is that the questions themselves are largely irrelevant, but a huge database has been collated on those thick enough to request help. When aliens land and require a certain percentage of our population for experiments then this is the list our government will turn to as those we can easiest afford to do without.
Posted by Wurzel at 13:27

Email ThisBlogThis!Share to TwitterShare to FacebookShare to Pinterest
Labels: news

filling in the census or not filling in the census seems to be a choice as to whether you want the government paying companies such as lockheed martin to process and access your information and then sell it on to other companies.
Knowing that our government has chosen to pay lookheed martin - largest manufacturer of arms, nuclear weapons and a convicted company on over 50 accounts of fraud and spying is beyond belief.

@Anonymous Unfortunately my life is so boring and uneventful that I don't care in the slightest who knows the information requested or what they do with it. :-)

I was pleased to see that the question about religion was voluntary, otherwise I feared dire consequences if I had entered `Saints fan.`